B.A.S.E is an acronym that stands for Building, Antenna, Span, and Earth. Simply put, it is a sport in which parachutists jump from fixed objects. 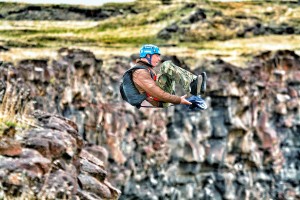 "The Age of the Tweener"

Graduating with a Bachelors Degree in Psychology from the University of Nebraska in 2002, Chuma began his “jump” into BASE with a solid skydiving career beginning at the age of 16 in Caldwell, Idaho. In 2007, after completing over 1700 skydives Chuma made the move to Twin Falls, ID where he now runs a very successful BASE Jumping School – Inter-Demented BASE. The school is known throughout the world as one of the most elite training centers.

Chuma’s impressive athletic background in gymnastics, skiing, and pole-vaulting has provided him with the necessary skill set and physical fitness to successfully perform complicated aerial maneuvers in BASE Jumping. He has become well known for his originality and style within this arena and is responsible for several world recognized BASE Jumping tricks as well as pioneering many unpacked jumps and refining the “game over”. Chuma is responsible for making the “tweener,” named by chuma, famous amongst jumpers by successfully performing this trick off multiple BASE exits. Chuma’s background in gymnastics gives him a unique kinesthetic awareness that sets him apart from other Base Jumpers, when it comes to tricks, solid exits and landings.

In 2009, Chuma and his former business partners developed the world’s first commercial Tandem Base Jumping operation. During the experimental phase Chuma personally performed most of the test jumps with experienced Base jumpers acting as passengers. Since 2009, he has completed over 500 tandem base jumps without incident and currently holds the record for the most tandem BASE jumps completed. He has completed a tandem jump off all four objects in the word BASE. It is believed that he is the first and only person in the world to have done this. His company, Tandem Base LLC, has performed Tandem Base jumps at bridge day in Fayetteville, West Virginia for the past 6 years and Chuma was the first person in the world to complete a tandem base jump from the Menara KL Tower, and the Wisma Sanyan in Malaysia, 2013. In 2014 Chuma became the first person to perform a Tandem Base Jump in Zakynthos, Greece at Shipwreck beach and later that year in Arco, Italy at Monte’ Brento. Later in 2014 Chuma finished in the top 16 at the Red Bull Aces Wingsuit race, an event where the world’s best wingsuit athletes completed in a slalom course held in place by helicopters. In 2015, Chuma performed the first quadriplegic tandem base jump with passenger Pete Bonser. The following year Chuma took the first person with Cerebral Palsy, Marlena Katene, on a jump from the KL tower in Malaysia.

One of his favorite achievements includes taking 102 year old Dorothy Cluster on a tandem BASE jump from the Perrine Bridge in June 2013. Being able to travel the world, meeting like-minded people, and BASE jumping in incredible places is Chuma's biggest joy. 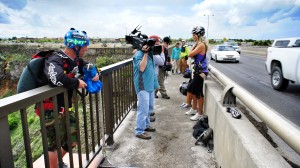 Currently Chuma is moving towards a career in television and film, and has made several television appearances in the past 4 years, including the Travel Channels “Ride-iculous,” "Trip Flip," and MSNBC's "Caught on Camera."  He is currently working with producers and colleagues on a television show that highlights the type of lifestyle he enjoys- being a professional “fun maker” Despite this very impressive professional history, Sean remains grounded and humbled regarding his achievements and always stresses the importance of planning, experience and guidance in all areas of BASE jumping.